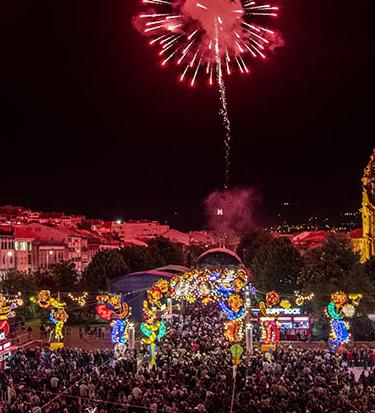 If there is something that distinguishes the festivities of Saint John of Braga from the rest of the Saint John’s festivities in Portugal, it is its history, so old, great and memorable, made by the people of its community!

Born in 1150, the date on which a church dedicated to Saint John was founded in the city of Braga, it was during the 16th century that the festivities asserted themselves as one of the most popular festivals of Saint John that involved more people, especially in numbers of spectators.

With activities where the profane merged with the religious, the Black Pig Race became one of the most important moments in the Saint John’s festivities calendar of Braga, to which were added, already in the 18th century, the masks and biblical dances.

Consolidated in history as the oldest Saint John’s celebration in Portugal, Braga lived, in the middle of the 19th century, two important and simultaneously coincident pilgrimages: São João da Ponte and São João do Souto.

The first one had as its main characteristic the realization of a frank fair, which took place in the surroundings of the chapel of Saint John. The second one joined to the usual religious celebrations a procession, where the Dance of King David and the Shepherd's Carriage were the protagonists.

Increasingly attractive to the community of Braga, but also to outsiders, it is at the end of the 19th century that the city took an important step towards the union of the two Saint John’s festivities. In 1983, a commission of festivities was designated to perpetuate the festivities of Saint John of Braga.

The festivities of Saint John of Braga ended up being confirmed as the biggest festivities of the city, thanks to the involvement of Braga City Council and the Commercial Association of Braga, resulting in an increase of the number of events, institutions, people involved and spectators year after year.

The representations commemorating the Passion and Death of Jesus began in the Holy Land in the fourth century, since, after centuries of persecution by Roman power, Emperor Constantine, with the famous Edict of Milan (313), gave peace to the Church. They took place at the places and times when the respective events had taken place. The pilgrim Egeria (or Etheria), who, at the end of that century, went from northwest Iberia (Galécia) to Palestine, in her writing Peregrinatio ad Loca Sancta (Pilgrimage to the Holy Places), already gives an account of those celebrations. It was in fact the pilgrims who made Holy Week known and extended to the Christian world the custom of celebrating it. It is probable that in the lands of the Iberian Peninsula, this has been happening since the fourth or fifth centuries.

In its turn, Lent - alluding to the forty days of the crossing of the desert by the people of Israel and the forty days that Jesus spent in the desert - arose as a time of spiritual preparation for the baptism which, already in the third century, was celebrated at the Easter Vigil. Since the 5th century, it was also assumed as a penitential time for sinners who were to be reconciled with God and the Church on Holy Thursday.

Braga's Holy Week, whose exact beginning is unknown, undoubtedly enters into this centuries-old tradition and preserves the original sense of commemoration of the mysteries of the Passion, Death and Resurrection of Christ, having been enriched in the course of time with innovative and exclusive elements. In a similar way, Lent in Braga maintains the double original sense mentioned above, having also been enriched with celebrative actions of preparation and setting for Holy Week and Easter which are unique in Portugal and in the world.

White Night is a cultural and leisure initiative that celebrates the city, the infrastructures and the culture of Braga. It is an event open to the community and visitors to the city.

More than one hundred free events, for three days and three nights make up the "White Night" of Braga.

Do not miss these events in the squares, streets, avenues, museums, university, hot springs, libraries and next to Braga’s Cathedral. Everywhere the party is held.

All together in a party that is proud to move on the axis between "the popular and vanguard".

The program is made of the most varied artistic forms, among concerts, animation and street cinema, parties, audiovisual installations and performances, theater and circus and dance, special decorations of the spaces and, among much more, gastronomy and special programming for children.

The "Braga Romana", usually takes place in the last week of May and has the purpose of celebrating the early days of the opulent city of Bracara Augusta.

After the Cantabrian Wars, which ended the conquest of the Iberian Peninsula, and the Roman pax was installed, the Roman Emperor Caesar Augustus founded three cities in the Northwest of Hispania: Bracara Augusta, Lucus Augusti and Asturica Augusta.

In this sense, the "Braga Romana" intends to recreate the Roman universe, in particular the daily life of the so-called Bracaraugustanos.

We usually say “in Braga be Bracaraugustano”!

Dress up, delight yourself with Roman delicacies revisited for you, enchant yourself with the dancers and dance to the music of the God Lupercus, have fun with the actors' pantomime, get drunk with Bacchus' juices, learn strategies in the games, health to Jupiter, honor Mars with the Legionaires and enjoy the handcrafted products.