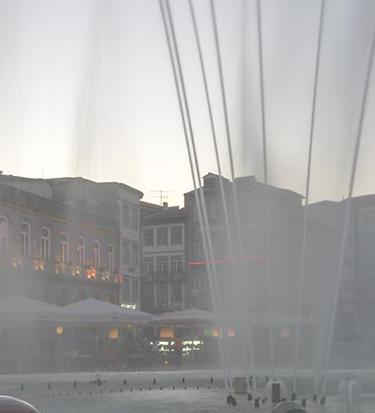 Located at the heart of Minho Region, Braga can be found in a transitional area from east to west, between mountains, forests and swathes to the great valleys plains and green fields. Lands built by nature and shaped by Man. Located in Minho region, which is composed by the District of Braga and the District of Viana do Castelo, in a total of 24 Councils, that represent 5% of the national territory and receive 10% of the national population, Braga is the capital of the District of the same name.

Geographically, Braga is located in the Cávado valley, in the Northwest region of the Portuguese Mainland, at latitude N 41º 32'39'' and longitude W 8º 25'19''.

The municipality’s terrain is characterized by some irregularity with lowlands that spread throughout its territory, which at times contrasts with small mountainous formations, aligned with the main rivers. At the North it is limited by the Cávado River, at the South by a group of hills that form the Mountains of Picos (566m) and at the East by the Mountain of Carvalhos (479m); at the Westside, the municipality faces the municipalities of Famalicão and Barcelos. The territory progresses from Northeast to Southeast, following the valleys of its two rivers, which, along with smaller river courses, created two platforms.

Valley areas that don’t reach high altitudes prevail, ranging their elevation between 20 meters and 570 meters, so generally, almost all the territory has a good solar exposition.

Administratively, the municipality of Braga is the capital of Braga district, comprehending 37 civil parishes in total, reaching a total population of 181 494 residents in 2011. The city is located in an important road axis and as a result it has reached a great economic, social and cultural development.